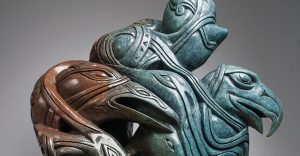 The Guild is proud to present, in the context of the MONTRÉAL FIRST PEOPLES FESTIVAL and in collaboration with LAND InSIGHTS, the most recent solo exhibition by Inuvialuit (Canadian Arctic region) master sculptor Abraham Anghik Ruben:  Similar in Spirit: Norse and Inuit Interactions. This exhibition, which will be held from June 1st to August 19, 2017 will be the first event of the season and will mark the launch of the festival. For the occasion, the artist will present fifteen sculptures. Each of the artworks shall be accompanied by a corresponding preparatory sketch, drawn by the artist. Awarded the Order of Canada in 2016, Abraham Anghik Ruben is recognized for his narrative works greatly inspired by myths and legends. He is inspired by various influences and his work mixes elements of Christian, Inuit, Northern and Western iconographies. In the same tradition as Inuit shamans, who are mediators between the world of animals, that of spirits, the world of Men, and that of Nature, Ruben, as artist, is keeping up with his filiations by acting as mediator between his history, his culture, his beliefs and the spectator viewing his work. For this exhibition, the artist will present his personal interpretations of various Inuit and Norse myths and their associated stories. Don’t miss this unique chance to dive into the world of these Northern peoples!