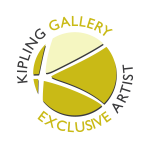 Abraham Anghik Ruben was born in Paulatuk, Northwest Territories in 1951 and has become a major innovative force among Inuit sculptors. Abraham has always thought of himself as part of the world of contemporary sculptors and has had to break down many of the subtle barriers that constrain the Inuit artist. He has proven that an Inuit can root himself in the south without losing his cultural Identity. Abraham has been exhibiting his work since 1973.

Abraham has clung fiercely to the stories and traditions he was taught as a child and although he studied art at university, he has often chosen non-traditional materials and tools to tell us the old tales and legends in a new way. His artistic exploration has led to creating monumental sculptures in Bronze for both indoor and outdoor installations.

Abraham has always been a promoter of other Inuit artists and was instrumental in helping organize the first ever exhibition of circumpolar art from the communities of Arctic Siberia, Alaska, Canada, Greenland, Sampi, Norway, Sweden and Finland.

Abraham was one of the artists’ exhibiting in the traveling Noah’s Ark presented by the National Gallery of Canada. Abraham’s work was exhibited alongside artists such as Pablo Picasso, and Edgar Degas. Abraham is featured in the winter 2005 issue of Inuit Art Quarterly. Anghik-Ruben’s art can be found in public, corporate and private collections throughout the world. Some of the public art collections where Abraham ‘s art is represented include: The National Gallery of Canada; Art Gallery of Ontario; Canadian Museum of Civilization; Glenbow Museum; House of Commons; Indian and Northern Affairs; McMaster University Art Gallery; McMichael Canadian Art Collection; Prince of Wales Northern Heritage Centre; Royal Ontario Museum; and The Winnipeg Art Gallery.

My earliest memory as a child was the day I became fully conscious of being alive. It happened on the beginning of my second spring. I had walked away from our tent and had gone to a nearby pond fed by a small spring. This memory was to be forever etched into my conscious being. Throughout my childhood I had similar experiences and always the most vivid of dreams, dreams of being in other worldly places and meeting people and beings in the dream world.”